Public or Applied Archaeology will play an increasingly important role in presenting and preserving cultural heritage of the United States in the coming period.  As readers of this blog are aware, I advocate for demonstrating the public relevance of archaeology and museums.  With a future certainty that discretionary spending will be increasingly cut, cultural heritage programs that best demonstrate their utility to the public, will stand the best chance of surviving.

Below are several links that show how this might work, first around the issue of metal detecting:

A couple of other recent links relevant to public archaeology include:

What other resources will you use to demonstrate the relevance of your cultural heritage projects funded by the public we are meant to serve? 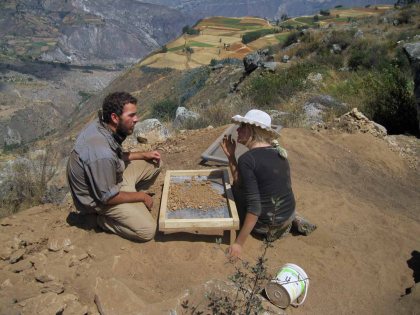 This semester I am teaching Applied Archaeology and Museums at the University of Memphis.  This course addresses my primary research interests – the preservation and presentation of cultural heritage and its use as an empowerment tool for the public.  Since I last taught the course two years ago, the resources for this empowerment tool multiplied exponentially.  A good bit of the growth comes from digital technology put in the service of human needs.  (Note this understanding of technology, well articulated by folks such as Clay Shirky, is at odds with the neo-Luddite perspective.  See here for my rant on all that.)

Access to the products of digital technology is not always simple or readily available.  Jason Baird Jackson posted an interesting piece on the high costs for accessing academic publications in a growing open access world.  The post includes a link to The Scholar’s Copyright Addendum Engine that allows an author to retain specific distribution rights for their published work.  Sherpa is a searchable database that lists distribution rights by journal that authors retain for open access distribution.  Here I am less interested in discussing specific open-access issues, and more some of the current venues and perspectives in which cultural heritage information is presented to the public.

On the digital end:

A common point for these new opportunities is that even in my low-tech and financially strapped museum existence, all are practical possibilities where the primary limitation is not technology but labor to produce the products – a situation that can circle back to volunteerism and community service learning.

A second common point is that products of these technologies are accessible to a public with a wi-fi connection and basic internet surfing skills.

However, when considering the products that will live in real-time contexts created by students in my Applied Archaeology and Museums course this semester – after all, isn’t that what applied is all about? – I am concerned that the products be relevant to public interests and needs.  Consider:

Co-creation with the public is a critical part of making resources relevant – whether digital or real-time.  Co-creation has become a buzzword in museum contexts for the past number years, as popularized by Nina Simon in her Participatory Museum volume.   My colleague Elizabeth Bollwerk and I have organized a fifteen paper session Co-Creation, the Public and the Archaeological Record  for the Society for American Archaeology Annual Meetings this April in Austin, Texas.  The session abstract is:

Co-creation in public archaeology is a means to engage and empower citizens to become stakeholders of the archaeological record. In museum contexts Simon (2010:278) writes that the purpose of co-creative community projects is “to give voice and be responsive to the needs and interests of local community members; to provide a place for community engagement and dialogue; and to help participants develop skills that will support their own individual and community goals.” The papers in this session discuss a variety of recent archaeological projects that implement the co-creative model. The contributions demonstrate how co-creation moves beyond “hands-on” educational experiences or typical volunteer programs because participants are invited to play an active role in designing and constructing the final products to address their needs and interests. Co-creation aligns with current emphases on informal, life-long, and free-choice learning models that foster public engagement in the preservation of cultural heritage resources. The papers in this session also explore the benefits and challenges of using this method and provide examples of best practices for implementation. Finally, these papers speak to the impact of co-creation on the discipline and how the process increases the ability of archaeology to contribute to debates on contemporary issues.

We are pleased that Carol McDavid, a pioneer in this process, including her work at the Levi-Jordan Plantation (link to 1998 website) will serve as a discussant for the session.

How do you envision co-creation in archaeology?

This week I am pleased to present a guest post by Ennis Barbery on her public archaeology research in Maryland.  Taking an ethnographic approach, Ennis explores the relevance and authority in the expanding role of public archaeology.  She notes that the very concept of what makes up public archaeology is not universally agreed on by either the public or archaeologists.  Ennis is a graduate assistant in the Department of Anthropology at the University of Maryland and can be reached at ebarbery(at)umd.edu

“It’s also about how the story gets told”: An ethnographic look at public archaeology programs in southern Maryland

Who has the authority to tell the stories of the past? What gives an individual or group that authority? These questions are constantly being negotiated and re-negotiated in different contexts. Ethnographic research that I conducted during the summer of 2012 while serving as an intern for the Star-Spangled Banner National Historic Trail begins to address these questions. As one of my primary projects, I interviewed, observed, and participated at a series of archaeology sites. My more specific research questions centered on how different archaeologists and others define and practice “public archaeology,” and I found that each archaeologist, volunteer, and staff member I spoke with defined public archaeology slightly differently.

First, to provide a little more context, the Star-Spangled Banner National Historic Trail traces the story of War of 1812 battles and troop movements in the Chesapeake Bay region. Its branches connect national parks, state parks, museums, historic house sites, and other establishments. One branch—the one that follows the Patuxent River through southern Maryland—connects a series of archaeology sites with “public” components:  Mount Calvert Historical and Archeological Park, Jefferson Patterson Park and Museum, and Pig Point (a site of the Anne Arundel County Lost Towns Project).   To varying extents, these programs on which I focused my ethnographic research invite non-experts to be part of their research processes and, in this way, each of them identifies as “public archaeology.” (An introduction and downloadable guide to the public archaeology along the Patuxent is available here.)

Although there are many facets of public archaeology (community meetings, excavation site tours, educational programming etc.) the part of public archaeology on which I have focused my research is the interaction between volunteers, archaeologists, and staff. Drawing from readings about public archaeology, this interaction stood out to me; it seemed to have the most potential to involve non-experts in a meaningful way (cf. Moyer 2004; Shackel 2004; Colwell Chanthaphoh and Ferguson 2008; Little 2007; Potter 1994; Chambers 2004). In one example that Moyer (2004) provides, local community members became involved as volunteers in creating interpretive products for the Bowne House in Flushing, New York, and—through their participation—Moyer concludes that they made the stories of this historic site more relevant for the concerns and interests of the other local community members.

With this example in mind, I went into my ethnographic research with the expectation that archaeologists’ definitions of public archaeology would include the kind of interaction that Moyer (2004) describes in which experts and non-experts work together to coproduce heritage knowledge, products, and stories. I wanted to see whether such acts of coproduction would really make heritage sites more relevant for local community members.

However, the archaeologists I interviewed along the Patuxent River demonstrated for me that not all definitions of public archaeology include this idea of co-production. One archeologist explained that his program constituted public archaeology because it allows volunteers to be involved in “real research” (June 27, 2012). He described giving volunteers opportunities to help excavate, clean and sort artifacts. When I spoke with a volunteer from this program she echoed this definition, emphasizing the processes of excavating, cleaning, and sorting “real artifacts” as opportunities that volunteers can take advantage of in public programs (July 24, 2012).

This brings me to the most interesting part of what I learned this summer, even those archaeologists who defined public archaeology as including volunteers in more than just the technical aspects of excavation and artifact analysis—even those who specifically talked about public archaeology involving coproduction of heritage products like museum exhibit text—seemed to run programs that primarily gave volunteers opportunities to be involved in excavating and sorting artifacts.

I must qualify that there were some exceptions (volunteers who helped write site report history sections or painted watercolor artifact illustrations for museum exhibits) and that the activities of coproduction I was looking for and asking about my have occurred when I was not present. It would not surprise me that, as a relative outsider, I might not been have granted access into the contexts in which interpretation decisions are discussed with valued, long-term volunteers.

Nonetheless, the primary activities I saw volunteers participating in and talking about were excavating and artifact sorting. I sifted through my interview transcripts and fieldnotes looking for answers to why archaeologists who defined public archaeology as including coproduction of heritage knowledge might be struggling to include process that would constitute coproduction of knowledge in the programs they designed and managed.

One factor I identified is time. While training non-experts to help with the technical aspects of archaeology may ultimately save time for archaeologists, it takes time and energy to involve non-experts in discussions of how to interpret findings. Sometimes work must be done over again when an inexperienced non-expert initially tries to complete a task such as mapping, writing site report text, or writing exhibit text. Apart from the time this takes, interactions in which archaeologists may have to repeat work for volunteers can create awkward or embarrassed feelings between these individuals. As a participant in these programs, I can recall several days when I went home feeling that I was showing down the archaeologists work because they had to redo work that I had initially completed.

Yet another set of factors for why the programs I studied may not be coproducing knowledge with volunteers is that members of the public may not have the time and energy to become involved to the extent in which they would feel comfortable contributing in this way. With one exception, all the volunteers I interviewed were retired professionals. This demographic pattern attests to the fact that becoming involved in public archaeology programs as a volunteer can constitute a significant time commitment, especially when volunteers become involved to the extent that they have actually gained the skills and knowledge to help coproduce heritage products.

Ultimately, this research contributes to discussions of the potential benefits of public archaeology programs and the realities of time and resources that constrain those programs. Moreover, I hope that this research also brings up questions that should be answered with further research: questions about how coproduction of heritage products can make a site more relevant for the local community and even more basic questions about who has the authority to participate in creating heritage.

Moyer, Teresa, 2004, “To Have and Enjoy the Liberty of Conscience”: Community-Responsive Museum Outreach Education at Bowne House. In Places in Mind: Public Archaeology as Applied Anthropology. Paul A. Shackel and Erve J. Chambers, eds. London: Routledge: 85-100