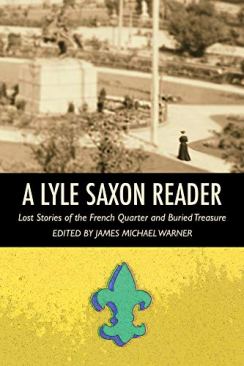 While roaming the French Quarter the other day I stopped in Beckham’s Bookshop (228 Decatur St) the premier used book store in New Orleans.  I came across a good copy of John Dos Passos U.S.A. Trilogy which would have been good for the day.  However, I also came across an unfamiliar title: A Lyle Saxon Reader: Lost Stories of the French Quarter and Buried Treasure edited by James Michal Warner.  I was surprised I had not seen a copy before as I have read most of the biographical material on Saxon.  The 2018 copyright explained why.

The book is divided into four parts.  First, is an introductory essay by the editor detailing Saxon’s life.  Warner focuses on the ambiguity Saxon created about his youth.  An included copy of Saxon’s birth certificate counters Saxon’s fictive claims of birth in Baton Rouge – he was actually born in Whatcom County, Washington.  Warner also explores Saxon’s mixing of fantasy and fact in his role as one of the early advocates for tourism in New Orleans.  The introduction provides a brief synopsis of the next three sections: short stories, History and Preservation articles, and character sketches, all written early in Saxon’s career between 1919 and 1923 and published in the Times Picayune newspaper.

The short story section contains eight pieces written by Saxon. I found this section the weakest part of the volume.  Edward’s notes that Saxon’s early short stories are not of the same quality as his later novels, including Children of Strangers, which I found to be patterned after Marie Stanley’s excellent novel Gulf Stream.  Regardless, this section of 50 pages often comes off as the overly contrived work of a novice story-teller.

The next section of the volume includes Saxon’s reports on the need for the architectural and cultural heritage preservation of the French Quarter.  Spurred by the French Opera House fire of 1919, the twenty-eight year old Saxon wrote passionately about the loss of this 70-year-old New Orleans icon.  The section also includes an article tracing the Ursuline nun’s 200-year legacy in New Orleans, based on Saxon’s review of the hand written 150-page history by Mother Mary Theresa.  In addition to stories on the Pontalba buildings that flank Jackson Square, this section includes one of Saxon’s early walking tours of the French Quarter, embellished and included in several of his later publications.  Presumably as well, Saxon here is doing what he does best – acting as a reporter.  Given the context of the articles in this section, one might assume that he does not drift too far into fantasy as he reports the events.

The final section of the volume, which takes up nearly half of the pages, is the strongest part of the book – Character Sketches.  Published in the Times Picayune as the series “Unusual Ways of Making a Living” the 25 sketches are as eclectic as they are entertaining in creating an image of New Orleans in the 1920s.  The range of employment includes street vendors, hotel workers, a cowgirl, artisans, office workers, fortune tellers, musicians and others.  The stories include the physically disabled, loners, folks eking out a living and just getting by.  I was surprised by the large number of European immigrants included in the sketches.  The picture painted is one that New Orleans tries to embrace today – a gumbo of flavors where everyone can find a place.

Over the years, I have found Saxon’s writings at times frustrating, but always entertaining. Frustrating because as head of the Works Progress Administration Federal Writers Project Saxon oversaw the production of the New Orleans City Guide and later Louisiana: A Guide to the State.  I would like to take these as accurate histories but also know of his inclination to create a New Orleans without blemish.  For example, in Gumbo YaYa, Saxon tells the fanciful tale of himself as a young child spending Mardi Gras Day in the company of Black employees of a Saxon relative.  The reader is led to believe they are getting an insight into a facet of New Orleans not typically explored.  As it turns out, Saxon was not there and conjured the story up later in life based on tales told over the years . . .

. . . which brings me to a personal conclusion on some of this.  When I was fresh out of graduate school, only weeks from successfully defending my doctoral dissertation, I was sipping sweet tea, sitting in the yard of my academic advisor in Bay St. Louis, Mississippi.  His brother-in-law was telling a story. As the telling went on, my academic training caught flaws, inconsistencies, and perhaps outright fabrications in the telling.  But my better half overcame my knee-jerk scholarly reaction to the fantasy in recognizing “But damn, that is a good story!”

Such is the case with this volume.  A Lyle Saxon Reader is well worth the read.